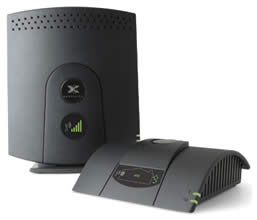 The Nextivity Cel-Fi T-Mobile booster covers the T-Mobile 3G/4G band, and is the first consumer repeater available. This band is called the AWS Band, and operates on the frequencies 1710 to 1755 MHz, and from 2110 to 2155 MHz. It’s dedicated to just this band, so it won’t work for other 3G networks, or for voice calls on T-Mobile.

The Nextivity Cel-Fi is completely wireless. Completely. There is not a single length of coaxial cable to run, making set-up even easier. The Window Unit receives the signal, converts it and sends it wirelessly to the Coverage Unit. The Coverage Unit converts it back, amplifies it and then broadcasts it around your home or office. This means the Nextivity Cel-Fi can be setup in under 5 minutes – just plug the two units into the power and it’s done!

The Nextivity Cel-Fi has a massive 13,000 sq ft of coverage. Our traditional kits which cover this kind of area cost over $1200 so at $545 the Cel-Fi represents great value of money.

If you have any questions about the Nextivity Cel-Fi T-Mobile Booster, then please contact us.